The Sun enters the Sagittarius Zodiac House on 23rd of November and stays there up to December 21st. This house is ruled by the planet Jupiter. The symbol of Sagittarius is the Centaur — a mythical creature half human half horse. The Centaur has a bow, and he is ready to fire an arrow. 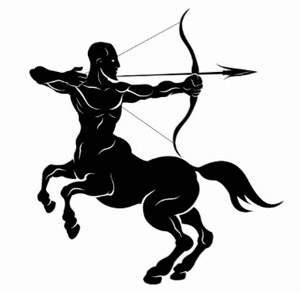 The constellation of Sagittarius is located on the Southern Hemisphere, between the constellations of Scorpio and Capricorn. The bow of the Archer is made up out of a group of three larger stars and it is visible without too much trouble. According to Greek mythology, Centaur was in fact Chiron — the son of Saturn who was famous for his medicinal skills, as well as general scientific knowledge.

Chiron, unlike the other Centaurs who were believed to be reckless and aggressive, was highly regarded and greatly respected in the Greek mythology. He was considered a kind, gentle, and understanding Centaur, not only wise and brilliant archer, but also a great physician and musician. Chiron was instructing Achilles how to defeat the Hydra. Accidentally he was poisoned by the Hydra’s blood and, as immortal, translated to the sky to represent the constellation of the Archer.

The Centaur is shooting upwards, with eyes fixed to the distance. That symbolizes the nature of this sign, as people born in the Zodiac sign of Sagittarius always try to look at the bigger picture, and rarely worry about the here and now.

Sagittarius individuals possess a strong and accurate perception, sensing the flaws and weaknesses in the personalities of the people around them. In that, they resemble the Archer, with their arrows hitting the mark each time. Sagittarians are decisive, progressive and have an enterprising spirit. Their thoughts and words carry the powers of intuition and inspiration. If they develop the ability to concentrate, circumstances will have hard time overcoming them. 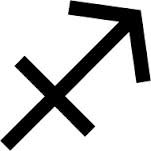 Sagittarians love freedom above all other things. That love pushes them to self-employment or, if the are in employment to such positions where their full sense of independence and liberty is preserved.

They have a loyal nature, clean and quick brain, and easily assimilate new ideas and can even change their mindset by 180 degrees if they find some other, more advanced modes of life. They have lofty aspirations, and they can be very much exalted and full of hope. They are fond of sport and outdoor activities. When they are in a good overall position, they can be splendid characters.

On the negative side, they can be bad-tempered at times, even though never willingly malicious. They can also be restless, rebellious, domineering and difficult to get on with. Usually, Sagittarians are not good with the details, and can never be trusted with them. Furthermore, they tend to exaggerate stories, not surprisingly, to their own advantage.

Like all signs of the fire elements, Sagittarians have to be careful if they decide to ignore the voice of caution. That can happen, for example, if they by virtue of their own enthusiasm take on too much, making them act without foresight.

In pursuing their visions, people born under the sign of Sagittarius can exceed the limits of reality. Even if they find themselves in a difficult situation, Sagittarians can cope better than the other astrological signs. Being a mutable sign, Sagittarius is adjustable and understanding. Everything they face they tend to view like an opportunity for growth and advancement.

Usually Sagittarians are fond of animals, especially horses and dogs, and animals can be their constant companions.

The most frequent ailments to which Sagittarius persons are liable are lung troubles, rheumatism, problems with the thighs and hips (area of the body ruled by this sign), and diseases affecting the circulatory system.

In relationships, they can have problems due to their demand for freedom and individuality. That can cause problems on a regular basis. As they try to give their best, they demand the best from their partners in return. Most harmonious relationships they can establish with the zodiac signs of Aries, Leo, Aquarius and Libra, whereas on the opposite end are usually Pisces and Virgo.