SCORPIO is the eighth Zodiac sign. The Sun enters the house of Scorpio form October 24. to November 23. The constellation of Scorpio can be seen on the Southern horizon, relatively low, and late at night in the months of July and August. The largest star of this constellation is the Antares. Antares means “as brilliant as Mars — the ruling planet of this sign”.  Alongside Mars, Pluto is also a ruling planets of this sign. The name Antares was given in ancient times; modern observations have determined that the splendor of Mars is in fact much greater than the stars of the Scorpio constellation.

In Greek Mythology, the Scorpion was put in the sky and thereby made immortal by the leader of the Gods — Zeus. The main achievement of Scorpio was seen in his fight with Orion. He had stung Orion, fulfilling the wishes of Apollo and Gaia. After Orion had died from the poison, he  was also given a prominent place in the heavens. The location of Orion and Scorpio is 180 degrees apart, preventing their further confrontation in the sky. 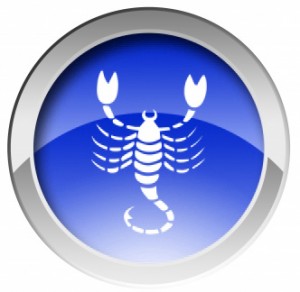 The symbols of this sign, in addition to the obvious Scorpion, are an Eagle and a Serpent. The Eagle usually stands for the mature Scorpio. When Scorpio becomes more mature and spiritual, it is transformed into an Eagle that soars above all creatures. The Eagle is watching and learning from above, being now much closer to God. The less mature Scorpios can be symbolized with the Serpent. They are by all means dangerous, but tend to avoid confrontations, unless something threatens them or their family.

The main characteristic of people born under the sign of Scorpio are intensity, invincible will, magnetic personality, strong determination and thoroughness. They use these character traits to carry out their desires, goals and intentions, whether good or bad. Scorpios have strong nature, powerful energy and positive methodical approach to everything.

Scorpio’s main characteristics are therefore related to power and self mastery. Scorpios tend to take positions of authority, some of their great strengths being leadership, motivation and the power of resistance. They always demand respect, even from people who have hard time understanding their intentions. They never give up; they are never discouraged and never afraid of danger when they want to help others. Scorpio is sometimes referred to as the sign of the physicians because they possess excellent diagnostic skills.

All these great character traits have a flip side. Some Scorpios can be destructive, malicious, sarcastic, cruel, lurid and domineering. Their temper can be impulsive and they are inclined to take offence. Even though they can be quite negative, they have a great self-control. Their strong passions take over whenever they are badly affected. Like the Scorpion, they are capable of stinging with their tongue. Being a water sign, the main battleground of Scorpio will be in the sphere of emotions, and they will generally have very strong desires.

In conclusion, the positive sides of Scorpio’s character will be reflected in their determination, concentration and courage, whereas the negative character traits will be fanaticism, jealousy and at times malevolent desire for revenge.

With people born in the zodiac sign of Scorpio, you will be either liked or disliked – there is hardly any middle ground. In personal relationships Scorpios are exclusive, but tend to show intense affections for people they are attracted to. On the other side, they are subject to sudden changes of emotions which is the main reason why they can be miserable in love or marital relations.

There is no doubt that Scorpios are difficult to please, yet they are  compatible with a number of zodiac signs, primarily, with people born in Cancer, Pisces, Virgo and Capricorn. In contrast, signs with least compatibility and little sympathy are Aquarius and Leo.