The chemical composition of Amethyst is SiO2, which is to say that amethyst is a type of quartz, or the other name for quartz — silica. Its hardness is 7 on the Mohs scale of hardness of minerals.

The color of amethyst is light to dark purple, sometimes, but very rarely one can find green amethyst and more often lavender or pink amethyst. If the stone is not transparent, white stripes are sometimes observed. Usually the stripes are V shaped producing a form generally known as chevron amethyst.

Like all the other quartz minerals, amethyst belongs to the group of Tektosilicates, which is to say that the most fundamental SiO4 structure units are distributed with respect to each other in 3D complex chains and frameworks. 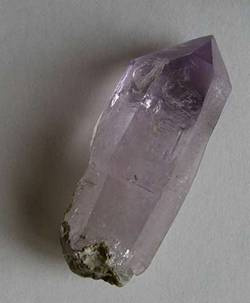 The origin of amethyst’s color is still a sort of mystery. At first it was attributed to traces of manganese, then some experts claimed that it was of organic origin. Now we believe that it has to do with iron impurities, and probably a role is played by aluminum as well. Our personal opinion is that the modern interpretation of the color origin in various minerals is deficient and cannot fully describe the actual complex physical picture.

Under high temperature, amethyst changes its violet color to yellow (read citrine), and with specimens from some special regions of the world, it can change color to green (thus green amethyst). Natural citrine is quite rare, and the majority of citrine stones today in the mineral stores is obviously originating from amethyst.

One interesting feature is that the heated amethyst that was turned into citrine can restore its purple color if irradiated by X rays.

The one of the largest mines of amethyst is located near the border between Bolivia and Brazil. This area is practically a tropical rainforest, hardly penetrable deep forests, which is accessible exclusively from the air. 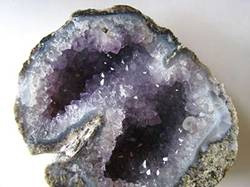 Amethyst is found in various forms, and probably the most common and most famous is the geode. While the geodes are quite common, another form of this crystal is relatively rare – spirit amethyst is an extremely rare form consisting of a macroscopic crystals whose surface is covered with a tapestry of very small points. The only place in the world where spirit amethyst is found is the Gauteng Province of South Africa.

The other rare form is Enhydra Amethyst. Here, we see trapped bubbles of water, whether static or moving, which are probably millions of years old. Amethyst phantom is another typical metaphysical form of this mineral, which is not as rare as the previous two.

The History of Amethyst

The ancient Greeks believed that amethyst prevents drunkenness. Of course, they had a myth to explain the origin of their belief: We won’t go into details, but it has to do with Dionysus, the Greek god of wine, and drinking who was offended when a mortal refused to express gratitude to him. A casual victim was a young girl named Amethyst, who, in order to escape the rage of Dionysus, was transformed by the goddess Diana into a gleaming, clean, white stone (quartz). Dionysus eventually realized the cruelty of his act and started to weep. As the tears leaked into his cup filled with wine, the wine began to spill out onto the stone producing the magnificent purple color of amethyst. This myth also sort of explains why the top of the stone possesses an intense color, while the rest of the stone is gradually becoming colorless. Consequently, to honor the memory of the beautiful girl, the stone was given powers to fight alcohol intoxication as well as all the other forms of intoxication.

Amethyst was found in the tomb of the Egyptian Pharaoh Djer, embedded in four bracelets of gold, alongside lapis and turquoise. Thus, we believe that amethyst was known already in ancient past, around 3000 BC. High quality amethyst with its royal purple color is often considered a stone of the royalty, sometimes even appreciated more than diamonds. We won’t go here listing all the members of the royal families of Europe, but certainly for a long time amethyst was considered a precious stones embedded in the jewelry together with rubies, diamonds, and sapphires. The discovery of amethyst in Brazil around 1730 enabled a source of precious extremely costly amethyst for some time.

Shortly after this wondrous crystal was discovered in the Ural Mountains in Russia, the price of amethyst started to go down, which ultimately also pulled down the position of this stone from the precious to the semi precious group of stones.

Amethyst – a Stone of Protection 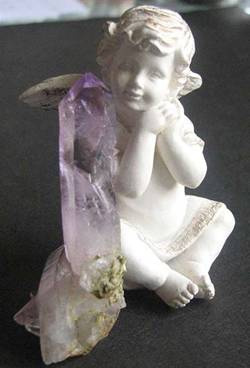 From the late Middle Ages through the Renaissance period the powers of Amethyst were used in such a way as to cover a wide range of personal needs. Medieval European soldiers wore amethyst amulets as protective talismans in their battles. During the renaissance, amethyst stones were carved into images of bears having protection in mind, mostly to protect against injury in battle or against infectious diseases.

Even Leonardo Da Vinci, a scientist, inventor and artist, believed that Amethyst has the ability to dispel evil thoughts and boost intelligence.
This is a nice example how the collective knowledge and intuition of various peoples regarding the interaction of the human body, psyche and spirit with crystals and stones, was transferred through the ages.

Amethyst – a Stone of Spirituality

Amethyst is a crystal whose powerful healing properties can be described as cleansing, calming and transforming. Amethyst heals all levels of the mind, body and spirit. The healing power of amethyst are connected with all sorts addiction problems.

Amethyst has a soothing quality, and therefore it is often associated with peace and tranquility. Its soothing and protective essence works in favor of improving our intellect, strengthening our attention, and cleansing our mind. Amethyst relieves the strain in our mind, especially when dealing with increased stress and/or when our mental activity is accelerated.

It relieves anxiety, worry, and restlessness and increases mental strength, stability and inner energy. It protects our mind from mental attacks, and helps to transform negative thinking into positive one. Amethyst brings an understanding of all sorts of transformation processes, of death and rebirth. It eases stress, sadness, depression, emotional despair and inefficient communication.

Amethyst works on the sixth and seventh chakra, while opening the third eye and enhancing awareness, perspective and introspection. It brings an increased intuition and accelerated psychic development. It assists in meditation and helps us to visualize more easily.

When you use it on the Crown chakra, it will allow you to recall your past lives. It is an excellent stone for problems with insomnia and nightmares. Many have testified that putting an amethyst stone under their pillow helped them enormously with restoring healthy and good sleep.

Amethyst can be used in healing as one of the healing stones for getting rid of alcohol, drugs or other kinds of addiction. In any of these cases, we should put a small piece of polished amethyst under the tongue of the person who shows symptoms of addiction. It is believed that amethyst is able to interact with the glands situated under the tongue whose responsibility is to communicate with the entire biochemical system of the human body.

Overeating, drinking, gambling, smoking, etc. all those activities reduce the physical and spiritual vitality of our organism. Amethyst encourages change of habits and helps redirect the energy trapped into the wrong behavioral patterns of our addictions. Amethyst will help restore our balance and change the programmed addiction so wrongly implanted into our body.