In the same way, the traditional chart of birthstones also relates Garnet to the month of February.  So, if you are born under the Zodiac signs of Aquarius and Pisces, your stone is Amethyst. People born in the sign of Pisces could also have Aquamarine as their birthstone.  However, as a mystical birthstone, considering the spiritual powers of this crystal, we believe that it is suitable for virtually all signs of the Horoscope.

Amethyst is a wondrous crystal. It has been used ever since the times of Cleopatra, who used to wear this crystal embedded in a ring with the engraved portrait of Mithra, a Persian unconquerable sun god.

The quality amethyst crystal was often considered to have a royal scarlet color. In this form it was a highly esteemed member of the royal courts, sometimes valued much more than diamonds. The love relationship between the British royal house and the amethyst stones has been known for almost 1000 years. The oldest known Amethyst amongst the crown jewels of the royal family is one specimen from the XI century.  Some 500 years later, the amethyst necklace in the possession of the first queen Elisabeth (1558-1603) was highly esteemed.

The European markets first encountered amethyst jewelry in 1772, when the Brazilian specimens appeared. During the next 70 years, amethyst became very popular and therefore precious. Not long after that, it was reported of vast amounts of raw amethyst stones in the Ural Mountains, Russia, which resulted in substantial price reduction.

Amethyst has been used to adorn more than just the members of the royal families. Pala D’ Oro, the high altar on the Basilica di San Marco in Venice is one of the most magnificent examples of masterpiece in jewelry. The alter depicts Christ, angels, saints and prophets. Among more than 4000 jewels, there used to be 1300 large pearls, 400 garnets, 90 amethysts, 300 sapphires, 300 emeralds, 80 rubies, and 4 topaz stones, most of them cut and polished.

Depicting the “Kingdom of Christ”, amethyst has been used by the Roman catholic bishops. Therefore, Amethyst has been given its second name, the stone of the bishops. At the beginning, it was an official token of the bishops’ authority and power. The amethyst ring was worn on the third finger of the right hand. In the medieval times Amethyst used to be a symbol of the high priest who was never in distress, never shaken, and never enchanted by the outer influences of the world. During the first church canon law, Amethyst was a forbidden stone for the clerics of other ranks than the bishops. Later on, the amethyst stone was taken as a symbol of the bishops’ marital relationship with the church.

Starting from the middle ages, through the time of the renaissance, and up to contemporary times, amethyst with its magnificent powers has always been used as a personal stone. 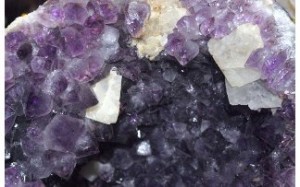 Medieval soldiers have been using Amethyst in form and shape of an amulet, as a protective symbol to keep them safe during the battles. In the renaissance times, it has been shaped as bear and used as protective talisman. Other uses are also known: to improve  alertness, as a shield from wounds in battles, against diseases, and as an antidote.

Even Leonardo Da Vinci, the great scientist, inventor, and artist, was convinced in the powers of this semi precious stone. He believed it has powers of dispersing all evil thoughts and encourage intelligence.

Jewel of spirituality and pleasure

Amethyst is known as a powerful crystal whose healing abilities can be described as:

Amethyst transforms the lower energies into higher healing powers that can touch all levels of the mind, body and spirit. Amethyst possesses calming qualities and because of that it is often considered a stone of peace and calm, especially on the levels of the intellect, awareness and mind. It calms the conditions of extensive mind tension.

This beautiful stone is one of the most important spiritual stones because it embodies the energies of the Violet ray. The Ascended master, Saint Germain, encourages us to use the powerful Violet flame to perform spiritual healing with the help of Amethyst’s channeling powers.

Amethyst is able to relieve worries and anxiety and to enhance mental strength, stability and energy. It protects the mind from psychosis and psychic attacks, and helps in transforming the negative thinking into a positive one.

Amethyst works especially beneficially on the sixth and seventh energy center. It increases awareness, perspective and introspection. It brings promotes intuition, and psychic development. We find that amethysts helps in meditation and visualization, as well and in recalling past lives when held on the seventh crown energy center.

It is an excellent gemstone to be used for fighting alcoholism, drugs or other types of addictions. In case of addiction, putting a small piece of polished amethyst under the tongue is believed to be useful.

In our society, people are constantly under pressure to fulfill certain patterns of behavior, stereotypes, and to be “ideal” in the sense society ask them to be. Therefore, we are not really able to express what we really are, to see our own potential. We are unable to withstand the pressure and often channel our energy in a wrong way, that is, we gamble, smoke, drink, and engage ourselves in activities that undermine our physical and spiritual vitality. Amethyst is an excellent stone to be used in order to restore our own rhythm and to withstand the pressure of life. All types of addictions are illnesses of the soul, and can be reverted with help of this stone and more importantly, with increased spiritual program and interest.

The direct answer is no. Amethyst is not an expensive stone, but again its price is dependent on so many factors. There are some miraculously beautiful raw amethyst specimens, which increases the price of such stones and crystals. If faceted and embedded in amethyst jewelry, the price can go up. You should be able to find loose amethyst stones to be used as your personal birthstones at very affordable prices.