While the traditional birthstone chart relates Bloodstone and Jasper to the month of March, the modern chart associates Aquamarine to this month. Therefore Aquamarine is widely regarded as a March birthstone. If you are born under the Zodiac signs of Pisces and Aries, chances are your lucky stone is Aquamarine.

Aquamarine belongs to the family of the mineral Beryl. Aquamarine’s color, like the color of the sea, can be of various shades of blue. Its closest relative is Emerald, the green variation of Beryl. Notable occurrences are in India, Russia and Brazil.

The name of this gemstone originates from the Latin words for water (aqua) and sea (marine). According to ancient legends, Aquamarine was first discovered as a part of the mermaid’s treasure chest and from there it was brought to the world. Therefore, it is no coincidence that this beautiful stone has always been regarded as the Queen of the Sea.

Eastern cultures have always revered Aquamarine for its purity and chastity. It was believed that this stone is very sensitive to personal influences. Therefore, it was often considered as a gift to newly wedded couples to preserve and increase their love. In fact, due to the ability of Aquamarine to keep the affections between the lovers true, all varieties of this stone are considered beneficial to the married people. If you are already in a long marriage, Aquamarine is believed to be the right stone to deepen the love between you and your partner. 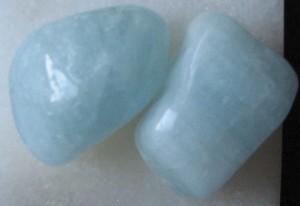 Aquamarine possesses great mystical and spiritual powers, even thought it is not considered the main mystical birthstone for any of the 12 signs of the Horoscope. If you are born in the month of March it is useful to know that the mystical birthstone chart associates Carnelian with Aries and Amethyst with Pisces.

Aquamarine was also regarded as the stone of the mystics and seers. Aquamarine will sharpen the intellect and improve the overall vision. It is believed to be especially good as a protective amulet, preventing sea sickness and drowning. Therefore it is very much revered by the mariners and sailors. Aquamarine has always been the lucky charm of people whose profession is somehow connected to the sea.

Just one look at this stone will tell you that this is a very gentle crystal. In spite of that, Aquamarine is not without its powers; it is capable of thoroughly cleansing your auric field and bodily energy centers. Aquamarine is especially good for working with the throat chakra. It is an excellent crystal for meditation, as it invokes higher levels of consciousness.

Aquamarine can help develop gentleness, sharpen the intuition, and enable clear sight in any situation. Aquamarine cures the throat area and the lungs, helping you deal with various lung conditions, such as bronchitis, lung diseases, and swollen glands.

It has a beneficial effect on the nerves, thyroid and lymph glands. It is believed to be able to prevent artery clogging and senility.

At the level of the psyche, aquamarine is good as a healing stone for depression, as it strengthens the self-consciousness.

Aquamarine should be discharged under running hot water, and charged in the sun.

Aquamarine elixir cures some eye conditions, respiratory diseases, hiccups, and allergy. It can be used also as a great skin tonic.