In one of our previous articles we have discussed the Traditional and Modern Birthstone of Aquarius – Amethyst. We have also touched upon some of the metaphysical properties of this gemstone, so you can also check that in addition to the following considerations.

The eleventh Zodiac sign is Aquarius – the Water Bearer. The constellation of Aquarius is situated in the Southern Hemisphere, right in the middle between the constellations of Pisces and Capricorn. Aquarius has only a couple of stars bright enough to be visible to the naked eye. However, using a telescope its full size and shape can be easily discerned, which is most easily done during the months of September or October.

The symbol of Aquarius – the water jug or vase – is rather universal, recognized by virtually all ancient peoples. Many star maps from the past, actually depict a human figure carrying the water jug. This figure is believed to signify the king or high priest outpouring the water of life over their followers and thereby blessing them. 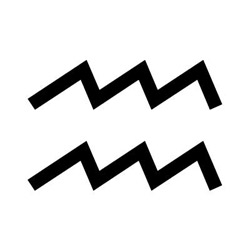 Saturn and Uranus are the ruling planets of the zodiac sign of Aquarius. Saturn also rules over Capricorn, and can have a very strong influence when it occupies the House of this sign. On the other hand Uranus can affect Aquarius more than any other planet, however, Uranus was unknown to the ancient astrologers, who used to wrongly ascribe the influence of this far-away planet to that of Saturn. 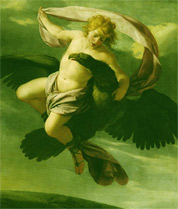 The myth about Aquarius is associated with Ganymede, one of the most beautiful young man of Troy. Zeus, the highest of the gods of Greek mythology, captured the boy transformed as a giant eagle, and brought him to the Mount of Olympus, destined to become a personal servant of his own. Thus, Ganymede was forced to be a cup bearer in service of Zeus. After some time, Ganymede couldn’t take it any more, and decided to pour out all the wine from mount Olympus down to earth. This caused heavy rains and floods that threatened the entire world. Zeus, realizing that he was unfair to the boy, decided to make Ganymede immortal, securing a place in the Southern sky in the form of the constellation of Aquarius.

The versatile nature of Aquarius provides them with skills and abilities necessary to succeed in practically any area of life. This can be a virtue but also a flaw, because Aquarians can easily scatter their energy and talent in so many directions that they lose the opportunity to select a single professional occupation.

Although Aquarius appears at first sight to be a water sign, it is in fact an air sign. As an air sign, Aquarians are supposed to be rational and intellectual, good judges of human nature, and with good reasoning powers and analytical skills. However, more often than not, they are prone to caprices and sudden and inexplicable changes of behavior and mood.

People born under the sign of Aquarius are known to express their opinion openly and speak their mind freely. They have progressive ideas, and are capable of pursuing their goals even when there seems to be slim chance of success. Thus, they often achieve goals unimaginable to other people, despite all the difficulties and obstacles.

This type of personality is often possessed by extremes, including erratic behavior and indecision, as well as egocentricity and oddity of character. Because of that, Aquarians can make their own misfortunes very easily.

People born under the sign of the Water Bearer have fertile and complex minds. They have a wide and far-reaching interest. Their diffusive nature makes them great teachers and lecturers, capable of passing on knowledge and insight to other people in an easy way easy for understanding.

People of this sign are successful in areas such as science, metaphysics, art and engineering. Some of the most ingenious inventors, such as Thomas Edison, are to be found in this sign.

Aquarians can suffer from rheumatism, problems with the digestive system, as well as wrenches, twists and injuries to the ankles, which are the area of the body ruled by the Aquarius sign. 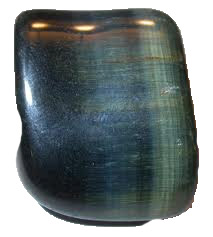 When it comes to interpersonal relations, this sign can be quite demanding and difficult to please. Even though they seek company of other people, and tend to mix with others a lot, they are often amongst the most lonely of all Zodiac signs. They can build up the most harmonious relationships with people born in the signs of Libra, Aries, Gemini and Sagittarius.

As we already indicated, the modern as well as traditional birthstone of Aquarius is Amethyst. The mystical, that is, spiritual birthstone according to the mystical birthstones chart is Hawk’s eye.