The tenth Zodiac sign is Capricorn. The sun enters the zodiac house of Capricorn on December 22., and remains there until January 19. The constellation of this zodiac sign is positioned between those of Sagittarius and Aquarius.

Located in the southern hemisphere, it contains more than 50 visible stars, including the cluster of stars Messier 30. When compared to the other signs, the Capricorn Constellation is one of the least perceptible, just after Cancer which is the faintest.

Several thousands years ago, the ancient people of Babylon and Sumer knew about this constellation as the “goat-fish”. In fact, in Latin, the name Capricornus means “the goat”. In ancient Greek, it was associated with the god Pan, who was depicted as having horns and legs of a goat. Zeus placed Pan in the sky as a token of gratitude for his help in overcoming the monster Typhon. Pan eluded Typhon, whom Zeus managed to kill afterward with his mighty thunderbolt, by turning the lower parts of his body into a fish tail and plunging into water.

During the Bronze Age, some 5000 years ago, Capricorn was the sign that marked the winter solstice – the shortest day of the year. Today, the dominance of this sign still begins on the first day of the winter, and during its rule, the light increases and the days start to grow at the expense of the night. Thus, one of the metaphysical meaning of Capricorn is related to the promising and bountiful future that the increasing days may bring.

The ruling planet of Capricorn is Saturn. Saturn is symbolically depicted as an old man with a scythe, signifying the processes of time and death. 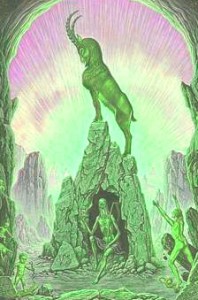 Depicting a goat climbing on a steep rock mountain may help us form the correct mental image about the inherent properties of people born in this sign. They are persistent, and patient in their endeavor, they can withstand numerous hardships, they can get over huge obstacles and possess great resilience and dauntless energy.

As an earthly sign, Capricorn values the importance of family, children, friends and earthly life in general. They also have a strong desire for acquiring knowledge, for self-improvement and professional advancement. All people born in the zodiac sign of Capricorn are great workers, capable of working long hours if that what’s needed to further their career and achieve their professional goals.

The work ethics of this sign is so great that Capricornians often have no time to be negative or violent, despite the adverse influences of the destructive side of their ruling planet Saturn.

Capricorn is a sign oriented toward making money, not only for the sake of having money, but also in order to enhance social status and get in a position of power. However, when it comes to things of personal interest, they generally have problems to make economically sane and rational decisions.

The typical individual of this sign takes life seriously, with strong inclinations toward keeping the tradition and customs of the past. They have strong and energetic disposition, but, under normal circumstances, they manage to keep their temper under control.

The negative aspects of this sign include mistrustful behavior, fear of failure, extreme greed for wealth and material gain and even desires for other people’s possessions.

In order to achieve balance, they should pay attention to their family and personal life, in contrast to working too much. To counterbalance their need for material possession, they should also devote a part of their life to acquiring non-material values, spiritual work and meditation.

Best professions for this sign are those where endurance, caution, prudence and penetration – features often seen in Capricornians – are needed. If you need someone that can show prudence and accurate discernment, a person of this sign will be great for the job. They are more often than not workaholics, capable of sacrificing a lot of their personal life for the sake of their carrier. People of this sign are often a recognized authority in their line of work. As natural organizers, they excel at being Editors, Statesmen, Priests, Designers, Architects and Writers.

This sign is rather slow when it comes to personal relationships and attachments. However, once they find their soulmate, people born in this sign tend to form strong and lasting relationships. On the other hand, they are prone to idealizing the very notion of what live is, and can be disappointed when their anticipations are not met. The influence of the ruling planet of Capricorn, Saturn, is seen in that they take their time when it comes to marriage. In fact, they then do be most happy and prosperous in the second half of their life. The best life partners of Capricorn are people born in the zodiac signs of Virgo, Taurus, Scorpio and Pisces.

People born under the sign of Capricorn have a remarkably strong constitution. Their body is attractive and with velvety skin quality. More often than not, they are able to obtain longevity. Generally, they resist all sorts of ailments very well. Their main health concerns include colds, problems with the joints and particularly with the knees, colic, liver and spleen problems, toothache and ear infections. Their excessive labor can bring come mental and physical problems, so Capricornians should find enough time to rest and revitalize their organism. Provided that they abstain from alcohol and if their diet is healthy, they can maintain excellent health in their old age.