December is honored with three birthstones, Turquoise, Zircon, and Tanzanite. Each of the stones of December has one of a kind attributes that make it both important and alluring. The Modern Birthstone List includes Zircon and Turquoise, whereas the Traditional List leans more toward Tanzanite, with some interpretations including also Ruby. In the following we will investigate the physical and metaphysical properties of the three most widely accepted birhtstones of this month.

Just for the record, the Month of December features two astrological signs: Sagittarius and Capricorn. If you are under either one of them, check the info below to select your potential personal birthstones. As an aside, you may also want to check the properties of Chalcedony and Onyx as spiritual stones of Sagittarius and Capricorn, respectively. 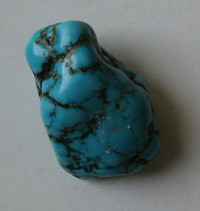 The name Turquoise has been derived from the French adjective, ‘Turqueise’ or ‘Pierre Turqueise’, meaning ‘Turkish stone.’ The stone was introduced to Europe by people from regions of the world that once belonged to Turkey.

The Turquoise gemstone is a hazy, blue-green mineral. In composition, it is a hydrous phosphate of aluminum and copper. This stone is formed by separation of groundwater through rocks rich in aluminum in the presence of additional copper. This mineral is found in depressions and cracks of modified volcanic rocks, but also forms thin crusts on the rocks’ surface.

The Turquoise is a dazzling blue-green gemstone, but its popularity has to do primarily with its lovely blue shades. The stone shows a grainy composition, with the most valued stones being typically sky blue, while more often you can find different gems of greenish color (less valued) or even dim. The green in Turquoise is normal, because of one of its components – iron.

Turquoise is mined and traded, among the other countries, in Iran, Turkey, China, Afghanistan, The United States, Australia, North India, and Chile.

It is one of the most widely used stones, often utilized as a part of Talismans and Amulets in old times as well as today. The stone was adored as a symbol of abundance and success in numerous ancient societies. Qualities like reputation, protection from external influences, and insurance against deception have all been ascribed to Turquoise. Additionally, this gemstone is considered a token of kinship, peace and favorable luck.

Turquoise is one of the gemstones respected by the Native Americans. Turquoise was engraved with feathered creatures to serve as a protective stone for the tribe. The engraved stones were put on the tombs of the tribesmen to ensure a smooth transition to the heavenly worlds after death. This stone was additionally utilized by the tribal healers to cure various illnesses, as well as by the brave warriors to guarantee success in battle.

Zircon, the second December Birthstone, is viewed as a symbol of chastity, virtuousness, trustworthiness, and respect. To the wearer, this stone offers protection against negative energies, against adversaries, and also in case of ailment and declining vitality. This stone is believed to be able to absorb negative vibrations wherever the wearer goes. Zircon is also believed to have strong healing properties and has long been used as a metaphysical tool to facilitate the recovery process. The recuperating properties of Zircon also help bring soothing rest and serenity. The stone likewise conveys honor and knowledge to the wearer.

Gem quality Zircon has a lot of colors. The red color is the most valued one, but it is rare and therefore expensive. Zircon of intense blue is also greatly valued. Many Zircons out there are heat treated to get the desired color.

This great jewel has the misfortune to have a similar name to the more famous, but cheaper and completely man-made Cubic Zirconia.

Notable occurrences are in Sri Lanka, Cambodia, Thailand, and Vietnam.

As indicated by a Jewish legend, an Angel was sent to the Garden of Eden to look after Adam and Eve. The name of this holy Angel was none other than Zircon. No wonder then that this gemstone has often been connected with immaculateness, dedication, honor, and celibacy. 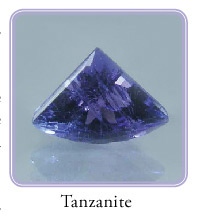 The third birthstone of December is the uncommon, provocative, and fabulous Tanzanite. The people of ancient times didn’t know about the Tanzanite gemstone, as it was discovered only recently. It is believed to be able to open, cleanse and balance the energy centers – chakras, and especially the heart and throat chakra. It is a stone that conveys dreams to the wearer.

Tanzanite has a very unique blue color that is different than the color of all the other blue crystals. The most beautiful gem quality Tanzanite is used to produce stunning and expensive jewelry. They come from the Merelani Hills in the Arusha region, Tanzania (Africa).

It provokes the wearer to accomplish greatness and pursue their dreams. The stone is connected with imagination. It permits the wearer to investigate new ways of expression, to push their limits and seek after one’s true purpose in life.

The Healing Powers of the December Birthstones

Turquoise has been used in crystal therapy to reduce gout and stomach sicknesses. Some people believe it is also useful to reduce spasms as it contains calming energies and conveys peace and bliss to the wearer.

Zircon is believed to diminish the torment of labor, to improve the intellectual capacities, and memory and to bring a sense of certainty to the wearer. This stone is also thought to promote innovativeness and to encourage affection, dedication and a sense of duty.

The Tanzanite gemstone dispels dormancy, sadness, and displeasure. This stone is believed to be useful to treat the heart, pancreas, mid-section area of the body, throat and spleen. It is generally accepted that the stone should be worn in direct contact with the skin to achieve greatest metaphysical effect.

If you are born in the sign of Sagittarius or Capricorn, you may choose between Turquoise, Zircon, and Tanzanite, or even use all three of them. Tanzanite is a bit expensive, but if you can afford it, go for it. It’s such a phenomenal birthstone. The alternative birthstones of this month are no less attractive either, and some items can be every bit as expensive.