In our previous article we have discussed the Spiritual Birthstone of Gemini – Tiger’s Eye. We have also touched upon some of the General Characteristics of this Zodiac Sign, so you are welcome to read that discussion prior to examining the Traits and Meanings of Gemini presented below.

GEMINI, the Zodiacal House of the Twins, is occupied by the Sun approximately from May 22. until the June 20. This House is is ruled by the planet Mercury. In the earliest Zodiacs the Gemini sign was symbolized by two kids. Later on, the Greeks substituted them with twin children, the sons of Jupiter, represented by two bright stars, Castor and Pollux. 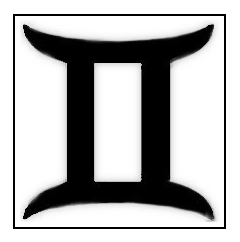 Gemini is also symbolized by two Pillars joined at the top and base, which is a diagrammatic representation of the Twins seated side by side with embracing arms. Castor was killed in battle, and Pollux, overwhelmed at his loss, entreated Jupiter to restore his brother to life, or make them both immortal. As a reward for this great affection, and in recognition of their noble deeds when on earth, Jupiter translated the two brothers, thus forming the Constellation Gemini in the heavens.

It was believed that among other achievements they cleared the neighboring seas of pirates, and when the Argonauts were in distress from a violent tempest, two lambent flames descended from the clouds and settled upon the heads of Castor and Pollux, a calm immediately ensuing.

From these circumstances they were regarded as protectors of navigation, it being inferred that whenever both stars were visible it was a harbinger of fine weather, the appearance of one star only signifying storms and tempests.

It may be noted that as a rule the seas are calm when the Sun is in Gemini, and it was at this period of the year that the forty days’ rain of the Deluge ceased.

The aforementioned symbol of the two Pillars joined at the top and base is also believed to represent the two pillars set up by King Solomon in the porch of the Temple, which were quite distinct and apart from the building itself and were not for any structural purpose. Their use is considered to be entirely symbolical. One was named ” Jachin,” meaning ” He will establish,” and the other ” Boaz,” signifying ” In Him is strength “. They can be understood as denoting the union of Intellect and Intuition.

The fortunate number of the Gemini type is 5, which was considered to have peculiar virtues as a Talisman by the Ancient Egyptians and Greeks because it unites the first even and odd numbers 2 and 3. It was often inscribed over doors to keep out evil spirits. It is interesting to note that in Roman marital ceremonies it was usual to light five tapers and to admit the guests by five.  Jewish history records a frequent use of this number, five gifts to the priests, five things only to be eaten in camp. Joseph gave five suits of raiment to Benjamin, and presented only five of his brothers to Pharaoh. David took five pebbles when he went to fight Goliath, and Joshua hanged five kings on five trees ; further, every important measurement of the Tabernacle was five or a multiple of five ; also there were five wise and five foolish virgins. In the Islam religion there are five articles of belief, namely in Allah, in the Prophets, in Angels, the Day of Judgment, and Predestination.

In Astrology there are five principal aspects of the planets which rule the good, or bad fortunes of the subject. Masonry speaks of five points of fellowship, an important symbol is the pentagram, and also five brethren can hold a fellow-craft’s lodge. The fifth son of Jacob, Issachar, represents Gemini, and, in naming him, Leah expresses the leading qualities of the symbol that is, reward and recompense which its mental qualities bring. 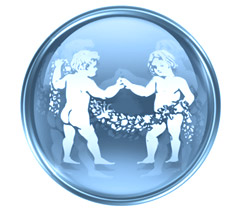 The individuals born during this period are invariably of an intellectual disposition, and when well-educated their ideals and aspirations are high, with an intense desire to do useful work. When inclined to religion they favor the intellectual and idealistic. In their family life they can be incredibly loyal and faithful, helping their relations however undeserving. Though generous to their loved ones or when prompted by personal influence, these individuals are not lavish in their expenditure.

Being fond of money and ingenious in their schemes and methods of making it, a Gemini personality likes to secure a good return for their money spent and their natural shrewdness enables them to get the better of their fellows. They have a quick comprehension of human nature which assists them in their schemes, enabling them to weigh up anyone they may be dealing with, and consequently to get the best of a bargain. Their success, or failure, will depend to a great extent on the positions occupied and the aspects in relation to each other of the Moon and planets at the time of their birth.

Under harmonious circumstances they possess keen judgment, quick wit, ability in artistic directions, and the faculty of acquiring knowledge without much visible effort, their capabilities carrying them to the highest mental attainments but, when ill-balanced, they sink to the extreme of clever trickery and fraud.

Their characteristics are often contradictory. Being peculiarly undecided in their dispositions and invariably of two minds, the constant influx of new ideas causes much innate restlessness, the realization of their plans seldom coming up to anticipations. Owing to the antagonism between their feelings and their reason, they are seldom able to concentrate on any one thing for any length of time, thus they start many schemes and enterprises which they abandon before completion. In consequence, Intuition and its forces, (as opposed to Impulse and individual inclination,) strain and perplex the versatile mind of Gemini individual, making them capricious and irritable, although their anger is easily appeased. They are highly strung, charming, restless, and fond of change and variety in their friends and associates, having great dislike to monotonous work and ever seeking fresh outlets to manifest their versatility.

In argument, from their facility of expression and dual nature, they are the most difficult of opponents to overcome. Many of our most clever advocates and solicitors have been born during this period, and as illustrative of the duality of this House, it produces, when favorably aspected, the best physicians, authors, orators, actors, schoolmasters, journalists, merchants, accountants, secretaries, and linguists ; also our smartest detectives. But when the worst side of their character is developed, the subjects of this House become the craftiest of law-breakers. The cleverest of criminals come from this type, ranging from fraudulent company promoters to thieves and pickpockets.

Gemini rules the arms, shoulders, and hands; and diseases such as sprains and displacements attack Gemini subjects in their limbs. The lungs, too, are sometimes afflicted, generally through defections in breathing; also a tendency to rheumatic and gouty pains in those portions of the body ruled by this sign, and when Mercury, the ruling planet, is badly aspected, digestive trouble, nervous ailments, and imperfect action of the liver are indicated.

The mundane and materialistic things of life do not ignite any passion or interest in a Gemini individual. People born under the astrological sign of Gemini are highly intellectual and sometimes they may go to the extent of playing mind games with their partners. Gemini is clever and if you want to win the heart of a Gemini, engage them in good conversations.

They are attracted to a partner who is intellectually stimulating. They are shrouded with an enigma, which allures the opposite sex. Gemini cannot withstand monotony in a relationship.

For a Gemini, love stems from the intellectual point of view. The superficial physical beauty of their partners does not infatuate them. The Gemini partners have a special interest towards philosophy and religion.  They also have the innate ability to understand the thought process of their partners. They look for a fast paced relationship and variety of expression. They prefer partners who can mentally stimulate them and are as quick witted as they are.

Gemini likes to have space in their relationship. A Gemini will love a person who gives them enough space and offers them comfort. In marriage and business relations those born during the Gemini period will agree best with Aries ( click here to read about the traits of Aries), Leo (here about the traits of Leo), Libra (here about the traits of Libra), and Aquarius characters, and it is a curious fact that in the lives of those born whilst the Sun occupies the House of the Twins, nearly all important events, fortunate or unfortunate, happen twice, and incidents in the career are repeated in a similar way.

On the other hand, the worst relationship matches of this sign are Taurus, Cancer, and Pisces. The first is too slow, the second too solid and oriented toward home and family, and the third too emotional for the taste of Gemini.