Taurus is the second sign of the Zodiac. The sun enters the zodiac house of Taurus on April 21., and remains there until May 21. The constellation of this zodiac sign is positioned between those of Aries and Gemini.

The constellation of Taurus is a group of stars named Hyades situated in the northern sky. In addition, the Pleiades (Seven Sisters) are also part of this stellar system. This is one of the oldest constellations known. The Hyades and Pleiades are in fact the closest open clusters of stars to our planet Earth. The word Hyades is of Greek origin and means “the rainy ones”. The ancient Greeks believed that the influence of these stars is crucial for rainfalls.

Many cultures, civilizations and mythologies, such as the Greek or Egyptian, associated Taurus to the bull. The sacred Bull of the Egyptians, Apis, is one of its many forms. Taurus, in fact, means bull in Latin. The most important Greek myth regarding this sign is the one where Zeus is transformed into a bull in order to get close to Europa and seduce her. After getting Europa’s attention, Zeus carried her on his back to Crete where he revealed his presence. Zeus and Europa had a romantic relationship in which three sons were born, the most important being Minus, the famous king of Crete. Later on, Zeus showed his respect to the bull and placed it in the night sky.

There are three earthly signs of the Zodiac, and Taurus is the first of them. Probably the most plausible interpretation of this sign is that Taurus stands for the creative forces of Nature. Venus is its ruling planet. In old Greece, Venus was represented as goddess Aphrodite. Aphrodite was often depicted with horns on her head, with clear astrological connotations.

In a more spiritual sense of the word, the sign of Taurus relates to the emotional world of the soul. It symbolizes the mutual relationship that exists between matter and spirit. If there is a desire, the soul needs to find means from the material world to go after that desire and ultimately fulfill it. Here, the desires may take different levels of sophistication. The lowest expression of desires is linked with the material plane. More intelligent desires have to do with the mental plane, where the acquisition of knowledge takes place. Ultimately, the lesson of desires is the lesson of transformation and transmutation of energy. The process of transmutation frees us from the  worldly attachments and brings us into spiritual realization.

When the soul matures, the eye of the cosmic bull can see the reality that stays hidden beyond the physical world. Now, Taurus can see through the illusion and observe the magnificent and  omnipresent cosmic light. 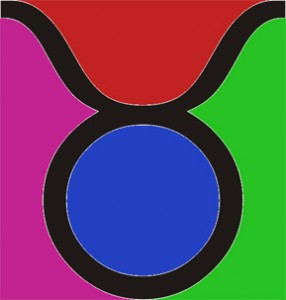 Taurus persons are determined, eager, courageous and lack no physical and mental powers. They have the ability of strong concentration, which helps them improve their learning skills. Under ordinary conditions, they are not easily provoked, but if provoked they can be explosive and fierce. They are most easily influenced by using their enthusiasm, however, if you try to force anything that opposes their inclinations they can be resentful to the extreme.

One of the most apparent character traits of Taurus is the strength of purpose. This feature translates into their interpersonal relationships, where Taurus individuals tend to be either loyal and committed friends or fierce enemies. In line with that, they will have certain difficulties to adapt their opinions with the opinions of their environment, especially at the beginning of the process of harmonization. Once they have managed to grasp the given conditions and learned how to use their inherent skills, they can easily reap the benefits of their application.

In addition to being persistent when it comes to pursuing their goals, Taurus people are also very patient. This combination of skills serves them very well, and they are usually capable of accomplishing their goals, although not always without a cost.

They are not so fond of sudden changes. That is not to say that they dislike traveling. They like to travel after previously carefully planning their activities while on the road.

The outlook of Taurus is always practical, although they never take money as such. They rather use them as a means for exerting power and influence. In business matters they show sharp powers of judgment. However, they are usually successful later in life, in their middle ages, after learning how to benefit from their experiences.

They have a strong vital nature, and are able to generate a lot of life force when the circumstances ask for.

As friends, Taurus persons are considered trustworthy and sincere. As much as they are sharp-witted in their professional life, they can be sensitive to emotional influences in their private life. To a degree, this might and be true in their business life too. Therefore it is best for the Taurean type of personality to make important professional decisions when alone and after careful considerations.

People born in this sign have a strong artistic side to their nature, which is primarily due to the presence of Venus as a ruling planet. Many great artists, musicians and painters are born in the zodiac sign of Taurus.  Being very well organized, they feel great if their profession requires discipline. All Taurus individuals are very diligent and hard workers, which makes them ideal for scientific research, military forces, administration, programming, or bank related jobs. Because Taurus rules the throat, singers or public speakers are also good professions for this sign. People who make a living doing public speaking or singing, as a rule, in their astrological charts have planetary harmony with Taurus.

Taurus can be hedonist, sensualists and pleasure-seekers. Generally, they have a healthy appetite and a tendency to put on weight especially as they grow older. The typical health problems of this sign usually include stomach, kidneys, heart and generative issues. Because of the above, proper diet plan is a must for all Taureans.

While the bull as we all know has horns above his head, the sign of Taurus actually rules the area at and around the human throat. Consequently, Taureans are masters of using their voice – it can be as sweet as honey or as harsh as razor, depending on the actual situation. Too much stress in their life can be manifested as a sore throat. This sign is also susceptible to colds and respiratory problems.

They can build especially harmonious relationships with people born in the signs of Capricorn, Virgo and Cancer.

On the other hand, worst relationship matches are Aries, Sagittarius, and Gemini. The first is too strong willed, the second too free in its spirit, and the third too much agitated for the taste and inclination of Taurus.