The Sun stays in the Zodiac House of Virgo from about August 23. to September 22. This Zodiac sign is ruled by the planet Mercury. Virgo was represented by three Cobs of Corn by the ancient Babylonians. The figure of the Virgin, which is the modern symbol of this sign, sometimes holds wheat in her right hand. Virgo, in fact, means “self-sufficient” in Latin, and from that expression the word “Virgin” was derived.

The constellation of Virgo is located in the southern hemisphere. The astronomer Ptolemy from Greece was the first to catalogue the Virgo constellation in the 2nd century. It is fairly large, the largest among the Zodiac constellations. Spica, one of the most intense stars in the night sky, belongs to it.

In mythology, the sign of Virgo was connected with several fertility goddess, including Isis from the Egyptian mythology, Cares from the Roman, Demeter from the Greek and Ishtar from the Babylonian mythology. Ceres, the goddess of fruits was in charge of the harvest. She was depicted as carrying a crown of wheat for her services. The Roman Astraea is also one of the goddesses that best embodies the zodiac sign of Virgo. The life-giving Astraea is a virgin and caretaker of humanity. She also represents justice. In modern astrological representations, Virgo is also the symbol of the Divine, Virgin Mary. The attributes of Mother Mary are archetypal of the persons born in this horoscope sign.

Interestingly, Virgo comes rather late into the notion of the contemporary astrology. The Zodiacs of the ancient past showed only ten Houses, with the House of the Scorpion including the positions of Virgo and Libra.

In astrology, people born under Virgo are indeed strong individuals and always act in a self-sufficient manner. They are capable of create for themselves, and this ability enables them to not only fulfill their own needs, but to nurture the needs of the others. Therefore, Virgo is not just a Virgin, she is the archetypal mother to all.

The Virgo personality is patient, attentive, diligent and cool. They usually have high self-esteem, a strong sense of responsibility, and are capable of keeping their emotions under control. Mercury is the ruling planet of this sign. This planet always stays within one sign from the sun in both directions. Therefore, Mercury also rules over Gemini. It is interesting to note that both Zodiac signs represent youth and innocence, exemplified via the Maiden and the Twin children.

Virgo, just like Taurus and Capricorn, is an earth sign. Earth signs are well aware of their body, which naturally leads to concerns about health and nutritional needs. On the negative side and when in a bad mood, they can be overly self-critical and nervous.

Virgos, more than the other signs of the Zodiac, need to be shown signs of appreciation and respect. When they feel themselves useful and appreciated, they can be some of the kindest people around.

Mercury gives the Virgos great versatility and ability to compete in the business world. They are very capable and effective in any professional or financial transaction. 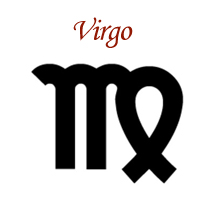 Virgos possess great analytical, critical, observant and research skills, which generally makes them very good at their workplace. People often consider them workaholics, which is not entirely true. But they are certainly perfectionists and possess the need to master their projects entirely. Being very thorough, people born under the sign of Virgo have convinced themselves that if their job is less than perfect, they will feel incomplete. In order to find the right balance, Virgos need to understand their desire to get things right, and to step on the brake pedal without overdoing them.

Unlike the Gemini personalities who start a lot of projects and fail to finish most of them, Virgos hate to leave their project unfinished, or to let others finish them on their behalf. Virgos can be rather private and secretive about their work and methods of performing it. They like doing things their own way, despite the suggestions of others. This is one of their character traits that may lead to problems in their social life. They are not happy when other people look at their work, especially if it is not finished. This also holds for their hobbies and routines.

The Virgo individuals excel in positions as government officials, lawyers, actors, scientists, physicians, editors, etc, and in all of these cases they best do their job if left alone.

Virgos usually don’t share the interest, plans or enthusiasm of their friends and family. This trait has an especially negative effect on the fiery signs of Sagittarius, Leo and Aries. At times, their temper is difficult to understand because they can be annoyed at things of little importance or value.

However, when it comes to marital affairs, they are true and faithful. Although they have difficulties to show their affections, they possess deep love for their partner. Their best match are people born in the Zodiac signs of Cancer, Capricorn or Scorpio. The least harmonious relationships are usually those with Gemini and Sagittarius.

Due to their high level mental activity, Virgos are prone to ailments of the nervous system. Their ruling planet Mercury, may induce anxiety and too much worry. The sign of Virgo rules over the digestive system, stomach and solar plexus area. As a result of too much activity in this region, Virgos may suffer from indigestion and stomach problems. Having natural recuperative powers, Virgos are usually able to recover quickly. Virgos love to organize things, and when living in a disarray, they may suffer greatly.

Virgos obsess over details and more often than not, they are lost in those details. Engaged in the endless process of analyzing and striving for perfection, people of this sign need to understand that nobody is perfect all the time. Given all this, it is no surprise that Many individuals of this sign struggle with obsessive compulsive disorder.

Some of the most important exercises that all Virgos should do daily include relaxation, massage, walking in nature, and meditation. All of them are important to quiet their minds and induce recuperation and mental refreshment. Otherwise, their natural analytical skills can easily be overused and they can get overly critical, stressed, and obsessed with negative thoughts and feelings. Prolonged stress and mental activity can lead to stomach problems and ulcers.

The modern birthstone charts associates Peridot and Sapphire  with Virgo. The traditional birthstone chart assigns Sardonyx and Lapis Lazuli to be the most powerful stone of Virgo. The mystical birthstone of this sign is Citrine, with additional important stones including Jasper, Peridot, Amazonite, Garnet and Amethyst.