One of the alternative names of Amazonite is “stone of hope”, as it is believed that it brings hope and inspires confidence with the wearer. This stone is thought to bring peace and creativity, and to promote honesty, communication, and self-confidence.

On top of that, Amazonite can help you manifest and maintain pure, universal love toward the people around you as well as toward your own life.

Notable occurrences are in India, Brazil, Australia, and the USA.

In composition, Amazonite is a silicate material with moderate hardness (6-6.5), which means you should be careful not to damage the stone while handling it. As a comparison, Rock crystal has a higher hardness of around 7. It is a close relative of Feldspar (Just for a reference, Feldspar based stones are Labradorite, Orthoclase, Moonstone, Andesine, and Sunstone).

Amazonite as a Birthstone 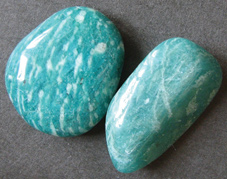 Amazonite is not one of the main Zodiac stones either. However some authors believe that it can suit people born in the Zodiac signs of Aries and Leo, as well as Scorpio in certain cases. Yet other authors believe Amazonite is a stone of those born between August 23 and September 22 (Virgo).

In any case, if you feel attracted to Amazonite in any way, go for it. Even if you are not one of the Zodiac signs mentioned above. Very often the gemstones we are attracted to are the most suitable stones for us at the particular point of time.

As a natural birthstone, Amazonite of turquoise color can be a good choice for people born between March 20. and April 19. This color brings harmonious vibrations and promotes stability and self-discovery. 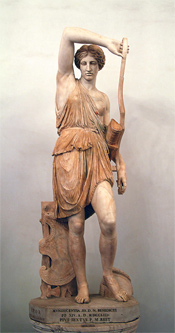 The most likely explanation of the origin of the name of this stone is that the name refers to the Amazon river basin where it was discovered.

There are other legends and lore. Some legends say that the name of Amazonite may have been given after the female Amazon warriors, Amazons, from the Bronze age. The Amazons were allegedly known for their habit of giving green colored stones to the men they came in contact with.

We know that ancient Egyptians also used this stone. In fact it was one of the six most precious stones to this ancient civilization. They used Amazonite to a great extent in their day to day life. For them, Amazonite was a stone of courage and personal power.

In the new-age community, Amazonite is used in various metaphysical practices, from healing and crystal therapy to meditation and magical use.

Based on its bluish color and association with the throat chakra, Amazonite is a stone to promote creative expression, good communication, truthfulness, and flexibility. In this regard, Amazonite can be the right gemstone to have by your side if you face a challenging public speech or you have to make hard decisions in the near future.

The greener varieties of Amazonite can be associated with the heart chakra. Thus, its balancing properties and promotion of personal integrity. So green Amazonite can be a good choice in case you have some strong challenges or struggles ahead of you. It will help eliminate the feelings of disappointment and increase the confidence in your own powers.

Deeper blue Amazonite stones can also be associated with the third eye chakra, where they can enhance intuition, or release stress and negative energy from the body.

In case you heart or throat chakra are not working properly this stone is one of the beneficial stones and crystals. Amazonite can be used to balance the work of all seven chakras and help cleanse discordant energies in them.

Some people use Amazonite to block geopathic energy or to prevent electromagnetic smog. For less intense radiation, for instance, cell phones, a small flat piece of Amazonite can be attached to the phone. You would need to have larger quantities of Amazonite if the energy pollution is strong, preferably a slab or larger rock positioned between you and the source of radiation.

On the level of the physical body this stone is good to promote the health of the nervous system and induce states of deep relaxation and restful sleep. Some people use it to improve the absorption of calcium.

How to Cleanse Amazonite

If you wear Amazonite as a birthstone, we suggest cleansing it twice a month. You can use running tap water and keep it under the stream of water for several minutes. If you need to charge the stone, the best is to use the morning sunlight. When Amazonite is used in healing sessions, it should be cleansed more often, preferably right after the work has been done.