Labradorite is a variety of feldspar of beautiful blue, grey, green, or yellow color or a combination thereof. The most important property of this stone that it shows a physical phenomenon called labradorescence. Labradorescence is a nice display of a rainbow colors as the light rays refract and interfere over the different planes on the surface of this stone. The attractive color flashes of Labradorite can be compared with the color of the most attractive butterflies in the world.

That’s why the alternative name of labradorite is spectrolite. 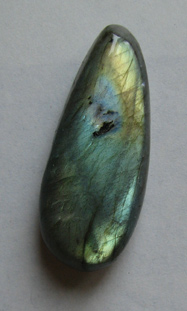 Labradorite is a stone of protection and mystical powers. It is believed to be able to reveal one’s true destiny and improve one’s psychic powers. It promotes deeper knowledge of the inner self and insight into the working of the higher mind. Moreover it can make a bridge between the lower and higher mind, that is to say between the conscious and super-conscious mind.

Labradorite combines the vibrations of the solar and lunar energies. It may help you develop practical new ideas and innovations.

Labradorite was discovered on an island in Labrador, Canada, in the second half of the 18th century. Traditionally it has been used for jewelry production in France and England.

An ancient Eskimo legend says that the Northern Lights (also called Aurora Borealis) used to be frozen in the rocks on the Labrador coast. One day an Eskimo soldier using his spear liberated most of the captured light. However, a portion of the light remained captured within the stone, giving off the beautiful colorful light Labradorite produces today at everyone’s delight. It is due to this legend that Labradorite is considered the stone of the Aurora Borealis.

As we already mentioned, the color of this stone is mostly bluish with green, grey, and yellow hues. It shines with a spectrum of iridescent colors when seen from different sides and different angles.

Usually, you would find a couple of dominant color with every specimen you inspect. Mostly, it will be predominantly golden, blue, or green.

The structure of Labradorite is very similar to the sparkling Sunstone. It is a silicate mineral that belongs to the class of Feldspars. Feldspar is a distinct group of silicates to which Moonstone also belongs.

The hardness of Labradorite on the Mohs scale of hardness is between 6 and 6.5. This is slightly below Quartz, (Rock crystal) as a comparison.

The optical phenomenon of labradorescence is characterized by an attractive flashes of colors depending on the angle of refraction. The reason behind this phenomenon is “light interference” that happens because of the delicate lamellar arrangement on the surface of this stone. This structure is combined with impurities of iron oxide or magnetite.

If there were no labradorescence, a great deal of the charisma of this stone would be lost. We would be left with its plain gray color.

When it comes to sizable deposits of this mineral, it mostly o occurs in U.S.A, Canada, Greenland, Russia, Madagascar, Finland, and Scandinavia. 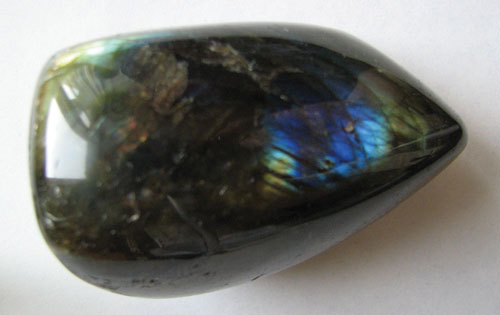 The records are not consistent about Labradorite as birthstone. It is clear that it is not a traditional birthstone.

Some source connect blue Labradorite with individuals in February and March. This approach is based on the most frequent Labradorite’s color, according to the natural birthstone chart. The blue color of this stone brings high respect and patience.

Other sources speak of Labradorite as a Libra stone (born September 23 – October 22). Cancer (born June 22 – July 22) is also drawn to the sparkling color of this stone.

Other modern interpretations of the birthstones charts put Labradorite as a birthstone of those born under the sign of Leo (born July 23 – August 22).

According to one of the available interpretation charts, Labradorite is also a birthstone of people born on Saturday.

Despite the fact that Labradorite is not a typical birthstone, you might want to consider having it anyway. It can be a life-changing stone, one that promotes success and transformation. 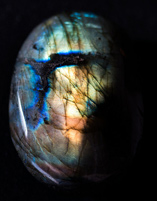 Large pieces of Labradorite are especially suitable to be kept in your living area, as Labradorite is believed to be one of the stones that purify the negative vibrations from the rooms and living space in general.

It can offer its beneficial vibrations to your physical body as well as to your higher subtle bodies. People use it in healing, but also in meditation and other forms of spiritual work.

Make sure you cleanse it regularly so that it is refreshed and purified after discharging the absorbed negative vibrations.